A downloadable SoulQuest for Windows

This is a work in progress demo, all the content is unfinished and/or subject to change.

Fight through countless hordes of enemy creatures and defy the forces of the celtic pantheon of Gods as you relentlessly pursue your ultimate goal: to take the power of Morrigan, the Goddess of Death, and retrieve the soul of your dead husband.

What can you expect?

• Learn the stories and unveil the secrets of this unique fantasy world heavily based in the celtic mythology.

• Put your skill to the test with multiple difficulty levels and unforgiving challenges for the most experienced players of the genre.

Will this be on either Mac or Xbox?
I would love to play this on Xbox.

This is honestly Amazing!

I Love the combat in this game! And the freedom for different kinds of combos is Incredible.

I'm currently working on a 2D Beat em' up game and I want to include aerial combos, I decided to play your game for some inspiration, and I am very Impressed, you did a very good job!

Good Luck finishing this game, I hope to play the Full Game someday!

Cool game, really love the combat you have so far and hope you continue improving on it.  However, you might want to change the name a bit, SoulQuest is kind of a cluttered search even on itch.io

Nice game . I hope you complate this game.

Really great game! Nice pixel art! This game is featured in my Top 5 of this Week!

I enjoyed playing through the demo, enough so I ran through it a couple of times (last attempt was to finish as fast as possible).

Here's a list of some things I noticed (in no order):

- I really like the camera and cameras can be hard to nail down imo, well done.
- Grabbable ledges are not obvious

- I love the directional attacks and the move variety allowed

- Walls you can Wall Jump/Wall Slide from don't look different from other walls.

- Enemies were really tanky with no visible hp. It felt like I had to hit an enemy 20 times before they finally died

- The rolling feels very responsive, I love to spam roll to get around

- The difficulty jump from regular enemies to the boss was huge. I didn't die until the boss fight, in which I died maybe 5+ times to figure out how to beat him. Rolling away from the boss's attacks got me hit very often. I found it better to just dodge behind him.

- I'm unsure if rolling makes me invincible (sometimes I would get hit, other times I wouldn't)

- Button Mashing on normal enemies felt fun, enemies don't really 'get a turn' since they tend to get stun locked in whatever combo you're spamming (this is the beginning of the game so I also don't expect enemies to be difficult). Although the large sword guy had some super armor some time so I wasn't sure when that happened.

Thanks for all the feedback! I would love to see how fast you complete the demo!

- The points about the walls and ledges not being very distinct is caused by the placeholder tileset but i will totally have that in mind for the final art.

- I will check all the points you made on the combat but i wanna ask you specially for the heavy long sword enemy, the idea behind those "heavy" type of enemy is that they cant not be throw around and need more hits to be stagger ¿You think the problem could be that is not so easy to stagger? ¿And maybe making it more easy to stagger would help the problem?

Slots are in order of attempts. First run through took 22 minutes, played around a lot with controls and experimented with everything.

Second run was first hard attempt and running straight through (died once to boss).

Third run was deathless and I skipped all chests and upgrades (gotta go fast). 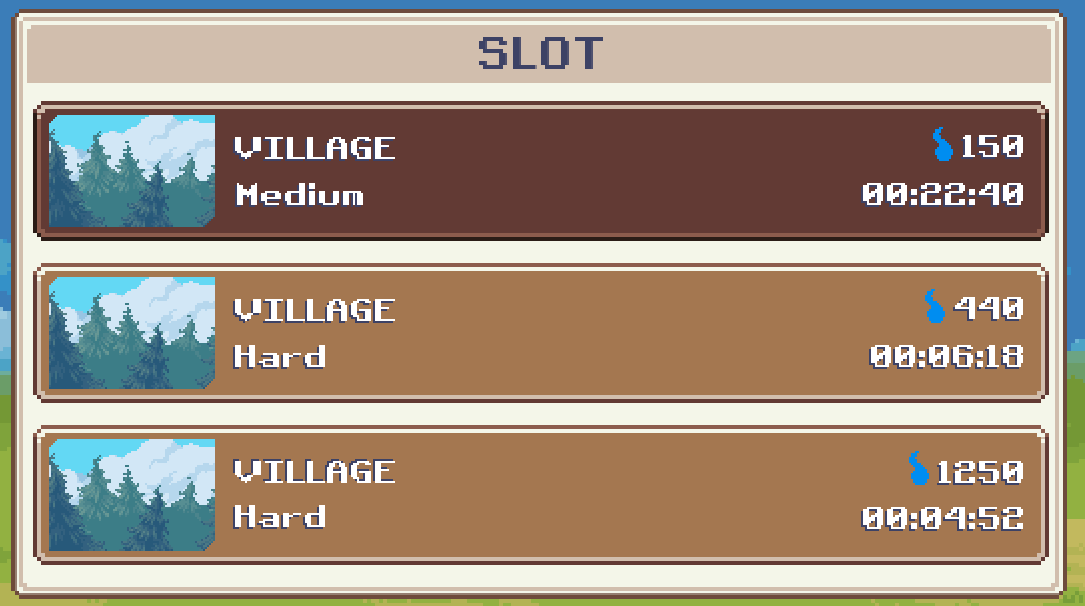 To your point on staggering, it'd be nice to know if you're about to stagger the heavy enemy, I wasn't really counting my hits and kinda mashing through (Light --> Heavy --> Slight Delay --> Repeat). I don't think it's an issue though since the attack is pretty telegraphed so I could react and dodge when I saw him raise his sword.

Very good demo! The game really has a lot of potential! I loved the use of combos and wide variety of moves and skills!

What I think can improve:

1. The character movement. She moves as if she were sliding! This can be a trouble in precision jumps or even positioning close to enemies.

2. On the boss I had some problems with a hit box, it could be something related to point 1. When the Boss use his jump attack, it was like he hit me... even without hitting me... if you know what I mean!

3. It's good to do some research on the name of the game! It seems to have others games with the same name or similar! It's better to find a name more unique for your game!

I really liked the project and I believe it has a solid base! When you creating a page on Steam let me know! This one definitely goes to my library! ^^

Thanks for the feedback! I will look all this for future updates!

I loved the demo. You made a good job about the sprite of the character and the controls are vrey good.